The following are 2002 Audio Recordings of selected transcripts by MB Hanrahan. You can download PDF written transcripts or audio recordings

Downloads are freely available via YouTube. Please take what you need.

The Song of Old Ventura 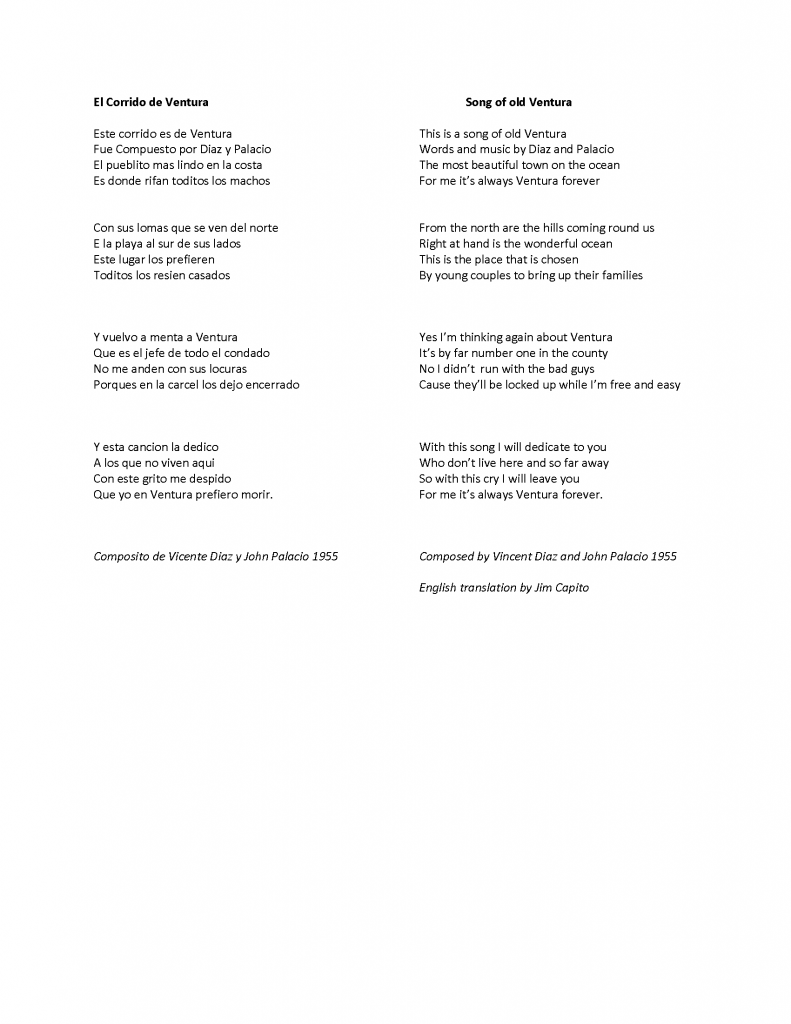 “Mural on the Wall”- Anonymous

The following are 2002 Audio Recordings of selected transcripts by MB Hanrahan. You can download PDF written transcripts or audio recordings

Although Moses Mora was displaced from the Tortilla Flats neighborhood as a young child, his family was known to Tortilla Flats residents. We remind you this was 1993. We did not have the “search engines” and social media resources available today. This neighborhood was literally displaced, and with no documentation, its history was essentially erased. Moses primarily asked questions during the interviews, (while MB videotaped the session); where did you live, where did you go to school, where did you shop, how did you have fun, and what did your parents do? We began with an aerial view of Tortilla Flats pre 101 freeway. From there, we began reconstructing a map of the neighborhood- collecting pictures, collecting stories, collecting names. We became amateur oral historians.

One interview led to another, word was getting around that we were collecting stories and photos. We had the great fortune of hooking up with Suzanne Lawrence, a docent at the museum, who also performed historical reenactments. She recognized the value of what we were doing, beyond gathering material for our mural. She volunteered to transcribe the audio-taped oral histories, which were, at the time of the first mural, over 100 hours. We continue to this day to record and transcribe (thanks to Punky-) oral histories and to collect photos and relevant historic materials.

This thanks to the Tortilla Flats Reunion committee, another branch of the Legacy project that developed from the early days of the first mural. As was mentioned, many of the families had lost contact with each other, since having to relocate when the Freeway came through in the fifties. Most of the folks we were interviewing were born in the 1920’s and 30’s. Moses’ generation were considered “youngsters”. Many families relocated up the Avenue, to the projects. The interview process was reconnecting people from the neighborhood. We collected stories and images, and, we say “images” as many scenes existed only as stories and descriptions. We asked for pictures, and were reminded that most Tortilla Flats residents lacked the discretionary income and equipment to take pictures of every detail of their lives, as we able to do today. This was a lower income, mixed race and religion neighborhood, where people spoke Spanish, English, and Chinese.

Moses: “What we thought was going to be a simple art project, a mural in particular, turned into a much deeper endeavor. We had no way of knowing how rewarding it would be to 1) uncover deep and rich stories of Ventura’s hidden past and 2) to meet some of the best people Ventura has ever produced.”